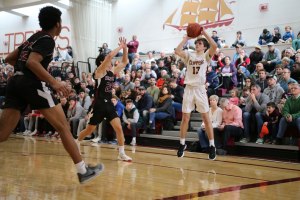 (Newburyport MA) The shots were flying and many from beyond the arc.

Newburyport had fifty points in the first half while Weston had forty-nine in the second half.

Eight lead changes. Three in the first quarter and five in the last quarter.

Exciting? Ask anyone who was there!

Weston grabbed the final lead change with two minutes left, thanks to the remarkable 6-10 Sawyer Mayhugh (36 points), and came away, 86-81, winning the D3 North quarter finals match on Saturday afternoon.

Senior Parker McLaren (34 points) played his last game for the Clippers and it was a beauty.

6-4 Parker had every aspect of his shooting talents working. The long-range game was on target all night. He made seven from out there.

Twice in the final quarter Parker scored from in close to restore the Clippers to the lead.

The game-deciding possession followed. There was an urgency on the Clippers’ part to protect the inside and keep Sawyer Mayhugh from scoring. The inside was definitely protected but the perimeter wasn’t.

Wide open on the left side, in front of the Weston partisans, was junior Will Van Houten (24 points). Will had time (and courage) to take and make the open three with fifteen seconds left. Now down by five (85-80) Newburyport lacked the time and accuracy to recover.