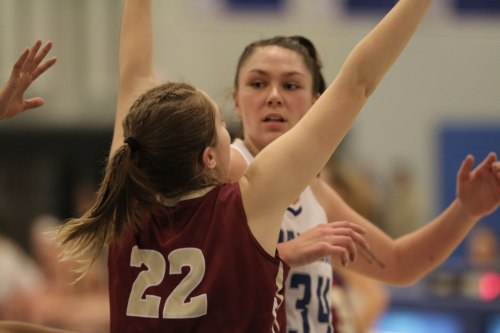 But Newburyport had the balance to offset Cheyenne’s big game and downed Danvers, 48-37, in the opening round of the Gieras Memorial Games.

The Clippers will face Reading in the title game tomorrow night.

Cheyenne had twenty-five points, twelve rebounds, and five blocks to literally carry Danvers on her back.

Cheyenne seemed as surprised as anyone regarding her special night: “I can’t explain the good game. We did have a shoot-around this morning and that probably helped.”

While the Falons (10-9) went scoreless during the final 2 ½ minutes of the half, the Clippers put up nine straight points thanks to Deidre McElhinney (15 points) and Abby Gillingham (12 points).

Deidre’s part was a three and two free throws.

Abby’s part was a jump shot (assist Jackie Doucette) and a nice put-back seconds before the halftime buzzer sounded.

The Falcons were down 40-26 in the closing seconds of the third quarter but Sabrina Auciello drilled a three to give Danvers hope as they entered the final period.

A free throw and a layup by Cheyenne Nesseinger and a layup by Kristina Yebba started things on a positive note for the Falcons in the final period. They were within six (40-34) with four minutes left.

The home team continued to stay close (43-37) with 1 ½ minutes left after Kristina Yebba dropped in a three-pointer.

But those would be the last points Danvers would score.