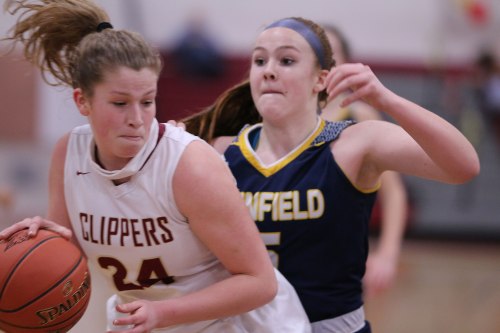 Fast Start for Lynnfield Leads to Win Over Newburyport

The Lynnfield Pioneers ended the regular season with a win and have a nine-game winning streak going.

They certainly did that tonight.

Caroline Waisnor (8 points) took the opening tip in for a layup and the Pioneers (13-6) were on their way.

It took the Clippers (10-7) four minutes to score (Deidre McElhinney free throw) and even with that point Newburyport trailed 10-1.

“The girls have really stepped up defensively,” said Coach Bocchino. “We’re long and some of our length is athletic.”

The Clippers were denied layups and faced contested shots from elsewhere. They only made one three all night.

Sophomore Riley Hallahan drained two 3’s early in the second period and by the end of that period the Pioneers led, 30-15.

Kate MacDonald led all scorers with sixteen points. The sophomore had ten of them in the breakaway first half.

The Clippers are a tall team.