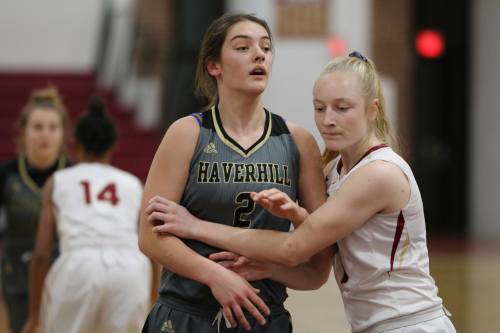 (Newburyport MA) Newburyport had the defensive heat on high from the get-go and gained permanent separation early against Haverhill.

The Monday night non-league game was an unsavory 47-35 loss for the Hillies.

“That was not Haverhill basketball you saw out there,” explained a disappointed HHS coach Melissa Tarpy afterwards.  “We didn’t play basic basketball.”

It certainly didn’t help the Hillies (3-6) that Merrimack Valley League All-Star McKayla Dingle was not in uniform.

“We were missing a player but that is no excuse,” added Coach Tarpy.  “Teams step up in those situations and we didn’t.”

“We got turnovers and layups,” said Sami Cavanaugh afterwards.

Sometimes turnovers merely change possession.  The Clippers had the kind that led to points.

“If our defense is strong, everything else is dictated by that,” said Newburyport coach Karen Grutchfield.

“We’ll never win a game with that many turnovers,” added Coach Tarpy.

The home team started the second quarter with two more hoops (Abby Gillingham layup from Sadie Vandenberg, Deirdre McElhinney steal and layin).  The Clippers’ advantage became, 23-7, and had me wondering why I thought this might be a competitive game!