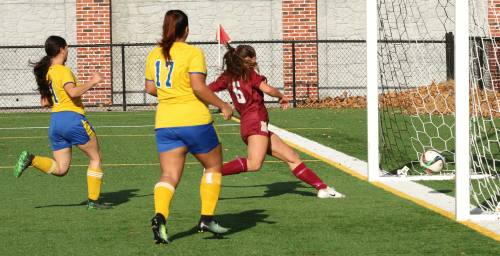 (Newburyport MA) The Clippers (10-6-3) scored early and often in their 11-0 Preliminary Round win over East Boston on Sunday afternoon.

Midway through the first half an EB long ball from midfield rolled to Newburyport keeper Anneliese Truesdale and the Clippers student section “cheered.”  Why?  That was the first and only ball that Anneliese handled during the entire half!

Meanwhile, down the other end, the Clippers applied pressure, pressure, and more pressure and the goals started adding up.

Newburyport coach Kevin Sheridan had everyone on his bench in action in the first half and used reserves for most of the second half.

East Boston coach Richard LaCara took note: “Newburyport is very, very skilled.  We appreciate everything that took place here.  It could have been a lot uglier than it was.  There was no running up the score.”